The Future in Puppy Form


With the GRE firmly behind me as of 4 pm today, Jeff and I set our sights on other things. Mainly: puppies.

We are casting multiple lines in the water as we move forward into our futures - both as individuals and as a couple. As much as we day dream and talk and hope for a future in dog sledding -  one that would allow us to do what we love, share what we love, be our own bosses and work from home - we are both realistic enough to understand that we need to create other possible options for ourselves as well (we still have to eat!). With this in mind, I have spent the last couple months studying for the GRE (Graduate Record Exam - the test required for admittance into graduate school) which I finally took today (sigh!) and Jeff spent the day on the "career" hunt (notice I say "career" and not "job") with the primary focus being on land surveying and carpentry.

Overall it was a productive day in town; with my test behind me and a summer job lined up for Jeff (we think) it was time to get home tonight and focus on what we would really rather be doing: working with our dogs. 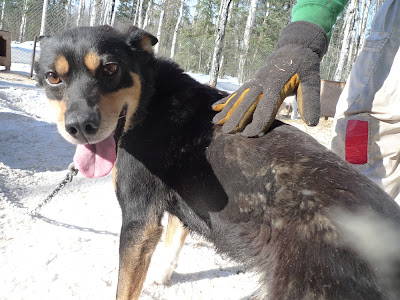 Dolly is a small yet ebullient female. She and her littermates were given to Jeff by his mentor, Frank Sihler, in 2006. In 2008 Dolly finished Iditarod with Jeff. When choosing the dogs who will form the foundational bloodlines for your kennel, there are many things that can be considered, and different mushers have different traits or qualitites that they value over others. We are choosing to breed Dolly for her great attitude, tough body and mind, and unbelieveable cuteness :) (Actually, I know that doesn't matter at all to Jeff, but it is worth noting!) 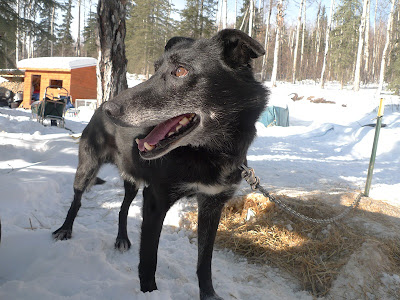 Garbanzo, at first glance, seems much different than Dolly. Where Dolly is wiggly, small and exuberant, Garbanzo is more reserved, large and serious. He is also our best leader (although you can never let him know that or he will take full advantage of you) and an extremely hard worker. He is also very healthy; still super motivated to work and in good shape for running in the team at his mature age of 10. Garbanzo has had a more typical sled dog life - moving between several accomplished mushers as their needs change and/or their kennels get downsized. Some of his littermates ran with Jeff in the 2008 Iditarod and Garbanzo has been with Jeff since 2009.


Dolly and Garbanzo have always naturally gotten along great, and tonight was no exception. The breeding went well and we plan to repeat for the next two nights. With any luck, we will be posting pictures of some beautiful puppies in about 2 months time. And with greater luck, this will also be the start to a beautiful future in the business and the life of Dogs.